Please join us in Brussels when in the neighbourhood! 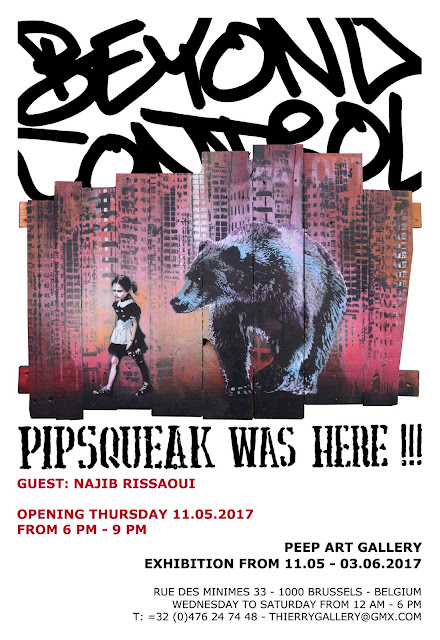 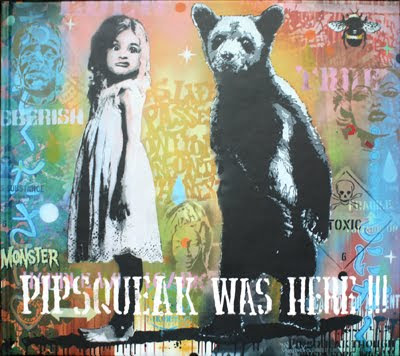 The new book of Pipsqueak was here!!! is online available at
The American Book Centre

We are an Amsterdam based artist duo, driven by a strong passion for all life on planet earth. In our work that has developed quite a bit over the years this theme remains untouched.

The logo we have chosen for Pipsqueak was here!!! Is a found object. On a trip through Maui we photographed an old traffic sign depicting both a boy with a fishing rod followed by a cat and a girl carrying her teddy bear followed by a dog.
Underneath the words, caution children at play. It took a while before we realised how much this image meant to us. The words, caution children at play, seemed to refer to the way we as mankind deal with our environment. Stating we are children that play with the planet in a rough fashion. It is a warning that combines to be cautious with the soothing fact we are playing as children, young ones that need to be educated. The girl with the bear eventually became our logo and also an image we started using for many works.

Animals have always been an integral component of human storytelling. They stand in for humans in fables and take the place of people in morality tales. The animals in our work, in particular the bears, are not metaphorical placeholders for humans, but are actually what they are supposed to be, animals. The purpose of representing animals literally in our art is to fundamentally change the way we regard and interact with animals in the real world. As environmental worries have grown, the relationship between animals and humans has become more strained.
There is a profound connection between consumer society, the politics of power, and the mechanisms of desire. The promise of a good life in terms of happiness, well-being and the success of an individual presumed that we have to have more stuff, has become compulsive. But this growth doesn’t really come without consequences. We act in a reckless way, using more natural recourses, taking more space and leave less nature for other inhabitants on this planet.
Concerns about the preservation of natural habitats to the quality of life for animals bring up issues that deserve to be considered. We don't know if the world needs saving, it's the human race that might need saving. We've got to return to a balance within the world.


We try to put our message across in an attractive way. It's important for audiences to see that it's not too late – or people won't see the point in doing anything. It is not a silver bullet, but we hope to start a dialogue.
Posted by Pipsqueak
Newer Posts Older Posts Home
Subscribe to: Posts (Atom)